The word atom was first introduced by Greek philosopher Democritus. He gave the concept that matter is made up of very small indivisible particles called atoms. The origin of word atom was Greek word atomos means indivisible, uncuttable (a– not, tomos-a cutting)

The word isotope was first used by Soddy. It is a Greek word “isos” means same and “tope” means place.

Isotopes are chemically alike and differ in their physical properties.

Natural abundance of isotopes of carbon is as follows

There are two natural isotopes of chlorine, 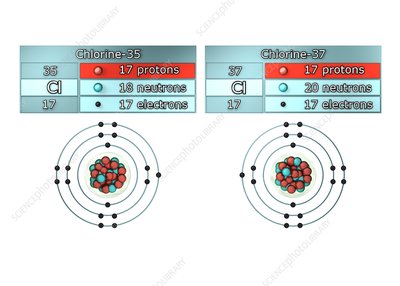 Fill in the blanks?

Stable and radioactive isotopes have many applications in science and medicines. Some of these are as follows:

Shells: According to the Bohr theory electrons in an atom revolve around nucleus in one of the circular paths called shells or orbits or energy levels.

Subshells: A shell or energy level is subdivided into subshells aor sub energy levels.n value of shell is placed before the symbol of subshell.

Order of filling of subshells

iii)    How many sub-shells are there in N shell.

Q.5:        Draw Bohr’s Model for the following atoms indicating the location for electron, protons and neutrons:

Q.7:        Describe the contribution that Rutherford made to the development of the atomic theory.

Q.10:      State the importance and uses of isotopes in various fields of life.

Q.12:      The atomic symbol of aluminum is written as. What information do you get from it?