(ii)Spreading of smell of perfume from one corner to the other corner of room.

e.g escape of gas through puncture in tube.

The SI unit of pressure is the pascal (Pa) which is very small unit, so that kilopascal (kPa) is used for atmospheric pressure under ordinary conditions. One pascal equals force of one Newton exerted on an area of one square meter. 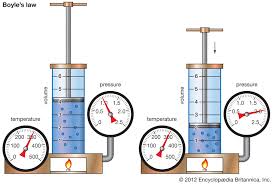 Gas can flow and can be transported through pipes over long distances but it can also leak more rapidly out of small hole. This is due to tendency of a gas to expand and fill the entire available space.

Gases have relatively low densities under normal conditions. This is because the molecules are much farther apart in the gas. When a gas is cooled its density increases because its volume decreases. For example, density of oxygen at 20oC is 1.4g/dm3 and at 0OC is 1.5g/dm3.

EFFECT OF PRESSURE: According to the kinetic molecular theory, gas molecules are in constant random motion. They move in straight line until they collide with another molecule or the walls of the container. The pressure a gas exerts in a container is due to the force exerted on the walls of the container. On increasing pressure on the gas, the distance between molecules decreases. So the volume of the gas decreases. On decreasing pressure empty spaces between molecules increases , that results in increasing the volume of gas.

Laws related to gases: A sample of a gas can be characterised by four variables:

The relationship that expresses the influence of one variable on another with the two variable constant are called gas laws.

In 1662 Robert Boyle studied the relationship between the volume and pressure of a gas at constant temperature. He observed that volume of a given mass of a gas is inversely proportional to its pressure provided the temperature remains constant.

Mathematically, it can be written as:

Where ‘k’ is proportionality constant. The value of k is same for the same amount of a given gas.

As both equations have same constant therefore, their variables are also equal to each other.

Thus the calculated result agrees with the pressure-volume relationship according to the Boyle’s Law.

According to Boyles Law

This relationship is known as the Charles’s Law.

temperature as stated by the Charles’s law.

It is a state of matter in which the constituent particles are loosely bound by intermolecular forces. Liquid change their shape with a fixed volume.

Some typical properties of liquids are given below:

It refers to the conversion of a liquid to a gas or vapour at all temperatures but less than the Boiling point of the liquid is called Evaporation or vaporization.

In evaporation, we have to examine the movement of molecules in liquid. The molecules of a liquid are not motionless. The molecules which have low kinetic Energy move slowly, while others with high K.E move faster. This is clearly observed in an open container of Ether or Acetone. The volume of the liquid gradually decreases and finally no more liquid is left behind. This is because of Evaporation. Thus this spontaneous change of liquid into its vapours is called Evaporation and it continues at all temperatures.

Higher the temperature, faster is the rate of evaporation and vice versa. This is because added heat increases the Kinetic Energy of the molecules. Hence liquids evaporate faster when heated.

The pressure exerted by the vapours of a liquid in equilibrium with its liquid at a given temperature is called vapour Pressure.

Let us consider a liquid enclosed in a container. Air is evacuated and the vessel is sealed. The liquid then starts evaporating and its molecules collide with each other. Some of the molecules are recaptured by the liquid phase. This process is called Condensation. When two opposing process proceed exactly the same rate then the system is said to be in a dynamic state of equilibrium and the number of molecules in the vapour phase exerts a definite pressure which is called the vapour pressure of the liquid as shown in the figures.

DEF: The temperature at which vapour Pressure of a liquid becomes equal to the external or atmospheric Pressure i.e 760mm Hg or 101.325 KPa at sea level is called Boiling Point.

The B.Point of some of the liquids are given below

When a liquid is heated in an open container, average K.E of the molecules, increases and atmosphere exerts pressure on the liquid surface. Therefore, the temperature of the liquid gradually increases. This heating process overcome the attractive forces and increases the V.P of the liquids. At a certain temp, the V.P of the liquid becomes equal to the external or atmospheric Pressure. At this stage, bubbles of vapours from throughout the liquid, rise to surface and escape into the air and liquid starts boiling. This is called B.P of the liquids. The Graph clearly shows the variation in vapour Pressures at 101.325 KPa of four liquids with Boiling Points.

Variation in vapour pressures with temperature of four liquids.

Liquids boil when their vapour pressure is equal to the pressure exerted on the liquid by its surroundings. The normal boiling point of water is 100oC.

A process called distillation is used to purify liquids. Distillation is the process in which a liquid is heated to vapourize it and the vapours are cooled to condense them back to the liquid in a different container.

In Solid State atoms, molecules or ions are very closely packed having definite shape and volume. They are in compressible and do not flow but vibrate about their fixed positions as shown in the figure.

The typical properties of solids are:

During heating, the particles of a solid start vibrating with greater Kinetic Energy. This makes the molecules a little bit apart from each other. This process increases the volume of solids. On future heating a stage reaches when the particles leave their fixed positions and start moving in the form of a liquid state as shown in the figure. This is called melting.

The temperature at which a solid turns into a liquid is called melting point.

On cooling, the liquid freezes. Thus freezing of a liquid is the reverse of melting. So the temperature at which a liquid changes into the solid is called Freezing Point.

Themelting and freezing of substances occurs at the same temperature. At this

temperature, the liquid and solid substances are in equilibrium each other.

The Melting Point of a solid depends on the strength of attractive forces that hold particles together in the fixed positions. Stronger the forces higher will be the melting point. Ionic solids comparatively having high M.P than covalent solids.

The vaporization of a solid substance into the vapour phase without passing through the liquid phase is called sublimation.

When impure sample of Iodine molecule is heated on sand bath. After some time dark violet black crystals of Iodine deposit the underside of the glass water placed on the top of a beaker containing Solid Iodine. The iodine vapour Sublimates from Iodine crystals in the bottom of the beaker and Condenses to form crystals on the glass.

On the basis of structure the solids have been divided into two classes based on their macroscopic appearance.

Amorphous is derived from Greek and “Amorphos” which means without shape. Hence Amorphous Solids are those in which atoms, ions or molecules are not arranged in a definite pattern, e.g. glass, Plastics, rubber etc..

Amorphous solids do not melt at a definite temperature but gradually soften when heated.

The solids in which atoms, molecules or ions are arranged in a regular repeating three- dimensional well- ordered pattern are called as crystalline solids. Crystals have regular shape. Particles forming the crystals are packed in a very exact and ordered pattern as shown in figure below.

Carbon has many Allotropic forms which are divided into two classes.

Carbon has three crystalline allotropes. The arrangements and properties are given below:

It is the hardest known Substance in diamond; each carbon atom is covalently bonded to four other C-atoms which are arranged in the form of tetrahedron. Diamond is used for cutting glass and polishing hard surface because of rigid compact array .

In Graphite, Carbon atoms are arranged in layers of hexagonal arrays. In these layers, each C-atoms is joined covalently by weak each Vender Waal’s forces. These layers slip over each other and makes Graphite Soft. Graphite is used as electrodes, lubricant in machines, and black pigment.

It is new allotropic form which consists of forty to hundred carbon atoms. These atoms are arranged in a hollow cage like structure. Simplest molecule of Bucky Ball is made up of sixty C-atoms. Carbon atoms are arranged in Pentagons (Five member ring) and Hexagons (six member ring) just like a soccer Balls shown in the structure with the formula C60.

Phosphours can exist in at least six different solid allotropic forms, three are common i.e white, Red and black phosphorus Phosphorus is a non-metal but here two are given.

It is a very reactive, poisonous, volatile, waxy allotrope which is soluble in benzene and carbon disulphide. It exist in the form of tetra atomic molecules (P4) and form a tetrahedral structure as shown below:

It is much less reactive and poisonous than white Phosphorus. The tetra atomic molecules of red Phosphorus combine to form macromolecules in long chains.

Answer  According to Boyles Law volume and pressure are inversely proportional to each other at constant temp. High pressure on gas molecules increases the intermolecular forces as a result of which volume of gas molecules decreases.

Q13. In the past, gas volume was used as a way to measure temperature using devices called gas thermometers. An experimenter obtains following data from gas thermometer.

by putting the values

Q.14 In automobile engine the gaseous fuel-air mixture enters the cylinder and is compressed by a moving piston before it is ignited. If the initial cylinder volume is 990cm3. After the piston moves up the volume is 90cm3. The fuel- air mixture initially has a pressure of 1. 0 atm and final pressure 11.0 atm. Do you think this change occurs according to the Boyles law.

According to Boyles Law

Q16. Instrumentation changes as science progresses, comment on it?

The search of man for collecting knowledge and integrating it is called Science. So true knowledge and its integration can be progressed more with the help of instruments. Some examples will prove the truth.

Nail Polish remover contains an organic solvent “Acetone”. It contains weak intermolecular forces and having high V.P. These high energy molecules escape from your palm and one feels sense of cooling. The other reason is that heat of body is used up to evaporate nail polish remover.

Greater the temperature of surrounding, greater the K.E possessed by the molecules and greater the escaping tendency from the surface of the liquids and Vice Versa. In summer, surrounding temperature is higher as compared to winter. So, wet clothes dry quickly in summer than in winter.